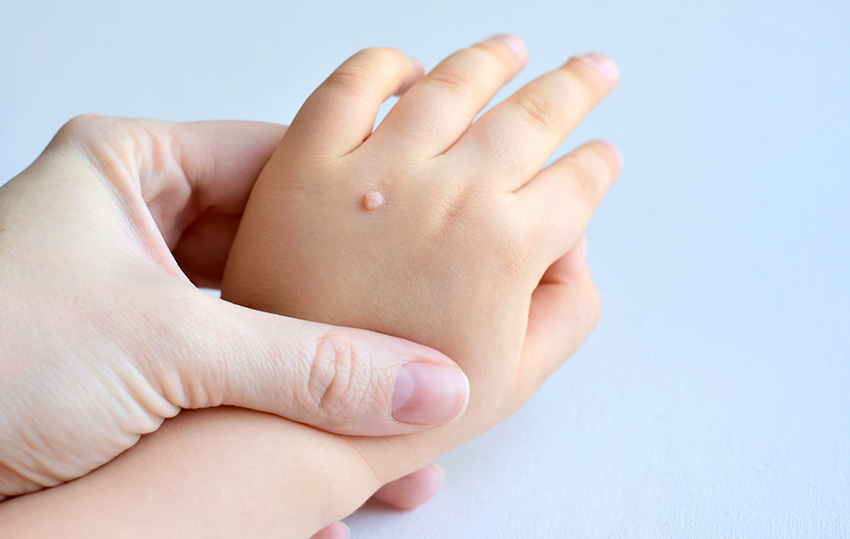 Verrukas (warts) are a group of diseases formed by a group of viruses called papillomavirus. The disease manifests itself in the form of benign tumoral formations on the skin and mucous membranes. Warts that settle outside the Genital area most often occur in children and young adults. Genital warts, on the other hand, pass sexually and are usually seen in adulthood. Warts are transmitted from person to person through direct contact and indirectly through contact with contaminated surfaces and objects. As with small skin abrasions and wounds, viral transmission is facilitated when the skin barrier is broken. Once the virus infects the skin, autoinfection (self-infection) occurs by scratching, shaving, and traumatizing the skin. After infection, the formation of a clinical image ranges from 1-8 months, but averages four months. Warts form different clinical symptoms and images depending on the area in which they settle on the skin and mucous membranes. Among them, the most common ones are the following warts. VERRUKA VULGARIS (simple warts) : most simple warts appear in the form of skin-colored, slightly rough, protruding papules and nodules. Especially on the fingers, elbows, knees, such as the areas exposed to trauma settle. Another common place is around hand nails. Warts can also be seen in those who bite their nails, lips and tongue. VERRUKA PLANTARIS (foot sole warts) : these warts usually settle in the pressure-affected parts of the foot. Many lesions are often found in one standing. They're painful when pressed on. VERRUKA PLANA (flat warts) : mainly occurs in children and young adults. They typically appear in the form of papules (protrusions) measuring 2-4 mm on flat, pale (light brown in dark People) skin. They are usually numerous. They cluster on the face, neck, hands, wrists, elbows and knees. VERRUKA FILIFORMIS (stringy warts) : These are in the form of stalked warts. They are more common in men on the face, neck. They settle irregularly on the face, especially on the lips, eyelids and wings of the nose. Verruka ANOGENITALIS (anogenital warts - condyloma acuminata) : Genital warts are the most common sexually transmitted disease. Most of the Genital warts are passed hidden without image and are in latent (pending) form. Genital warts in children can be taken directly from the mother at birth or in the uterus by downloading. It can be seen as non-sexual or sexually transmitted diseases with contaminated towels, underwear, etc. The presence of infection in the child's family and siblings should be investigated. Sexual abuse should be investigated, especially in the presence of anogenital warts in children over three years of age. The most important aspect of anogenital warts is that it leads to cervical (cervical) cancers in women. They can also lead to cancer called a Buschke-Löwestein tumor. It is important that women who have a history of having anogenital warts in themselves or their partner take a smear test every year. Anogenital warts form images in the form of cauliflower, small nodules or flat protrusions in the areas where they settle. Rashes are mostly in groups. Their colors are usually gray, light yellow, or pink. A large number of genital warts can occur during pregnancy. Genital warts can settle anywhere in the penis or around the anus in men. In women, lesions may occur on mucosal surfaces such as the vulva, vagina, cervix, perineum, or around the anus. Cauliflower-like skin lesions may develop in moist and confined areas such as the Perianal region, vulva and inguinal region. Bad odor may occur as a result of the accumulation of inflammatory material in the crevices.